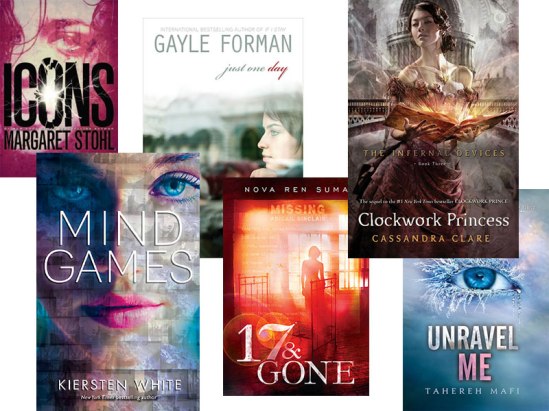 Considering that I’m still reading books that were released a few years ago, I’m not quite sure how much of this list I’ll be able to get to this year – although I did read the ARC of Prodigy (you can read my review here).

“Just One Day” is all it takes for American good-girl Allyson to fall for Dutch actor Willem during a trip abroad. But when she awakes the next morning and finds him gone, Allyson embarks on a year of self-discovery to move past the lost love. “Just One Day” is the first of a duet of novels—with the second, “Just One Year,” set to publish later in 2013.

Marie Lu’s debut novel, “Legend,” a sort of teen take on the classic “Les Miserables” story, left us on tenterhooks for a follow-up…which we’ve patiently waited more than a year to read. And here it finally is in “Prodigy,” which follows one-time nemeses June and Day as they arrive in Las Vegas and join a group of Patriot rebels, who promise to help rescue Day’s brother…if only the duo assassinate the new Elector.

“Unravel Me” by Tahereh Mafi (February 5)

Juliette escaped The Reestablishment in “Shatter Me,” finding a home with equally gifted people at Omega Point. But with a touch that’s lethal, she’ll never truly be free. Especially to love Adam. This sequel finds our heroine struggling with a decision that could mean her soul mate’s life.

Remember how uptight Alchemist Sydney Sage and devilishly handsome Moroi Adrian Ivashkov finally shared the steamiest of smooches in “The Golden Lily”? Well, expect the sexual tension to reach a boiling point in this third installment of Richelle Mead’s “Bloodlines” series. Ensure your smelling salts and fainting couches are at the ready.

Two sisters, two extraordinary abilities. Fia has flawless instincts—every decision she makes is the correct one. Annie, though blind, has vivid visions of the future. Both attend a school for gifted pupils, where their talents are leveraged for nefarious gain. The sisters must work together to free themselves…but at what cost?

Will Tessa choose kind-heart fiance Jem Carstairs or sarcastic bad-boy Will Herondale? One of our favorite (and most tortured) love triangles will (hopefully!) be resolved in the long-awaited conclusion to Cassandra Clare’s Victorian-set “Infernal Devices” series.

Lauren is having terrifying visions—visions of girls who have vanished without a trace. They’re all 17 years old, as is Lauren, which raises the troubling possibility that she could be next.

In Kiera Cass’ 2011 debut, “The Selection,” we met dystopian teen America Singer, one of 35 girls vying for the heart of Prince Maxon (and the position of Princess of Illea). And just as it seemed the two were falling head over heels for one another, America’s hometown heartthrob, Aspen, appearing at the palace, sending her heart into a major tumult. This is one royal love triangle, to be sure.

One half of the writing duo behind the Southern gothic series “Beautiful Creatures,” Margaret Stohl is going solo this spring with “Icons,” which follows teen Dol in the aftermath of an apocalyptic event that wiped out her entire family. She soon learns her uncontrollable emotions—long thought to be her greatest weakness—could, in fact, be the key to saving mankind’s future.

“Invisibility” by Andrea Cremer and David Levithan (May 7)

“Isla and the Happily Ever After” by Stephanie Perkins (May 7)

After falling in love with “Anna and the French Kiss” and swooning over “Lola and the Boy Next Door,” our bodies are ready for Stephanie Perkins’ third companion novel, “Isla and the Happily Ever After,” set once again at, arguably, the most romantic high school in France: the School of America in Paris. Now, where do we sign up for our own semester abroad?

“The Coldest Girl in Coldtown” by Holly Black (September 1)

Margaret’s “Beautiful Creatures” writing partner Kami Garcia also has a novel of her own coming out this year: “Unbreakable.” The story centers around teen Kennedy Waters, who following her mother’s death, discovers that she is a member of a centuries-old secret society tasked with protecting the world from demonic forces. We don’t recommend waiting too long to read this one—the film rights have already been scooped up.

There is one that I would also like to include in this list, and that’s the third and final book of the Delirium trilogy, Requiem, by Lauren Oliver.  This book features by #2 of my Top 5 Fictional Males, Alex Sheathes, and if you like dystopian and romance, you must read this!  Requiem is scheduled for release on March 5, 2013.

Of course, my #1 of my Top 5 Fictional Males would be in book listed above, and that book is Clockwork Princess, featuring the lovely Jem Carstairs, thank you very much.

Will you be reading any from this list?  Which ones?